As the chill of November sets in and the growing season comes to an end it’s time to think about Solomon’s seal. Solomon’s Seal is a ryzome used to bring muscles and ligaments back to balance. Muscles and ligaments that are too tight or too loose need Solomon’s Seal. This root should be gathered after the first frost. It will choke itself out if left to grow on it’s own. Take only as much as you need for a whole year and do so in a manner as to thin out the beds. They will overlay each other in mats. Never take i 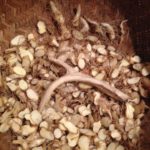 t all; you always need to leave some behind to grow again for future years.

Karyn Sanders taught me that Solomon’s Seal does not like being dug up by metal. With that in mind I use a fallen deer antler and my fingers. The antler is like the shape of my fingers, rather an extension of them, and works very well at reaching between roots of others to loosen the entire plant’s roots.

Once I get my herbs inside I brush them off with a dedicated paintbrush, the less expensive medium stiff bristles work best. Then wash them in a bowl of water. They don’t need to be pristine but get most of the dirt off them. I let them dry overnight or two days and then cut them diagonally.

From these dry roots I will make oils or tinctures or dry further for later use.

You have Successfully Subscribed!